The Value of a (Half) Dollar 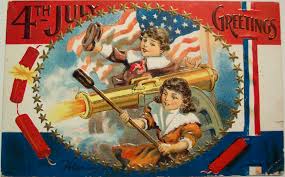 For this post we’re traveling back in time to an 1866 Fourth of July celebration as described in Farmer Boy by Laura Ingalls Wilder. The “Independence Day” chapter includes a great object lesson about the value of a dollar, or a half-dollar in this case.

At the town’s Fourth of July celebration, the nine-year-old main character, Almanzo, watches his cousin Frank buy a glass of lemonade for a nickel. Frank brags that his father gives him money any time he asks, but Almanzo has never had money. Frank dares Almanzo to ask his father for money, so he reluctantly approaches his dad for a nickel and tells him why. His father slowly takes a half-dollar out of his wallet and asks, “‘Almanzo, do you know what this is?’

‘Half a dollar,’ Almanzo answered.

‘Yes. But do you know what half a dollar is?’

Almanzo didn’t know it was anything but half a dollar.

After going back and forth with a friend about whether a boy Almanzo’s age can understand this principle, Father asks him to describe the long, hard process of raising potatoes to sell. Then his father asks, “”How much do you get for half a bushel of potatoes?’

‘Half a dollar,’ Almanzo said.

‘Yes,’ said Father. ‘That’s what’s in this half-dollar, Almanzo. The work that raised half a bushel of potatoes is in it.’

Almanzo looked at the round piece of money that Father held up. It looked small, compared with all that work.”

His father gives him the half-dollar to keep, and explains that he could buy a baby pig with it, raise the pig and its babies, and sell them full-grown for $4 or $5 each. Or he could spend it on lemonade which is gone in a few moments.

What would you do with the hard-earned half-dollar? Would you invest in a baby pig that, after several years could yield a 50-fold return? Or would you spend it on a pitcher of lemonade?

Almanzo buys the pig, and we all like to think we’d do the same. But what have you actually done? The half-dollar is real; it’s your hard work and valuable time traded in for a paycheck. Are you getting your work’s worth out of your money, or are you blowing it on trinkets and treats that’ll be gone too soon? Remember, the value of Almanzo’s half-dollar was not only the hard work that earned it, but also the potential value of growing his money through investment.

Somewhere in the shift from corn rows to cubicles, we’ve stopped viewing work as the opportunity cost of our spending. We looked at this principle in “What Are You Working For?” and Life Is Not About Your Preferences. Maybe we understood this trade-off when we were teens entering the work force, until our expenses got more complicated and our work became full-time and perhaps cushier.

It seems less back-breaking labor is often more soul-numbing, which is probably why so many white collars I know fantasize about becoming farmers! Whatever color your collar, gleaning from previous generations’ view of money can help us fight against the imbalances we’re unwittingly steeped in. Check out the Live Like Grandma Challenge for more throwback financial lessons.

Without obsessing about how many minutes at work each purchase we make costs, we can value our time enough not to take spending lightly. The best way to keep spending in check without obsessing about it is to set a limit on your lifestyle. Contentment is the true secret to financial freedom. Know when enough’s enough. And if you’ve already passed the threshold into “too much,” it’s never too late to turn back. Sell that junk, pay off your debt, and make the decision to inflate your usefulness instead of your lifestyle. And inflate someone else’s lifestyle by helping others with your money while you’re at it. (The only money Almanzo had handled until that Independence Day was a weekly penny for the church collection.)

Reigning in your lifestyle also allows you to enjoy life now. Rather than frantically work extra hours, frivolously spending to entertain work-numbed souls, or fretting to maintain a lifestyle above your means, why not consider what’s actually worth your hard-earned half-dollars? Cut the rest, and enjoy some free blessings like nature, friends, family, and library books. Why not add Farmer Boy to your summer reading list?.

What has taught you the value of a dollar? Do you agree that we’ve lost sight of this as a culture?

All excerpts taken from my 1971 Harper & Row edition of Farmer Boy by Laura Ingalls Wilder.